Vichy in the Tropics Pétain’s National Revolution in Madagascar, Guadeloupe, and Indochina, 1940-44 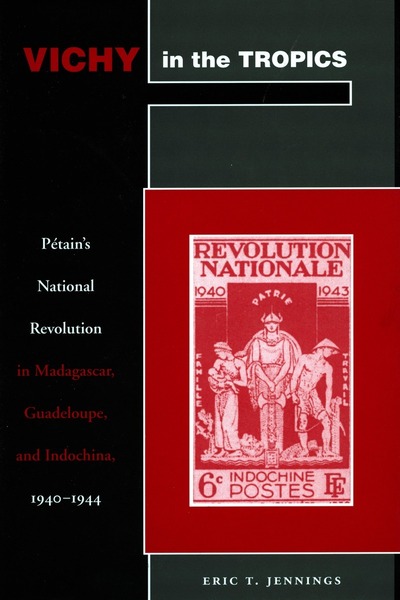 This book examines the role of the Vichy regime in bringing about profound changes in the French colonial empire after World War II. In the war's aftermath, the French colonial system began to break down. Indochina erupted into war in 1945 and Madagascar in 1947, while Guadeloupe chose an opposite course, becoming territorially part of France in 1946.

The book traces the introduction of an integralist ideology of "National Revolution" to the French colonial realm, shedding new light on the nature of the Vichy regime, on the diversity of French colonialism, and on the beginnings of decolonization. Encompassing three very different regions and cultures, the study reveals both a unity in Vichy's self-reproduction overseas and a diversity of forms which this ideological cloning assumed.

World War II is often presented as an agent of change in the French colonial empire only insofar as it engendered a loss of prestige for France as colonizer. The author argues that Marshal Philippe Pétain's Vichy regime contributed to decolonization in a much more substantial way, by ushering in an ideology based on a new, harsher brand of colonialism that both directly and indirectly fueled indigenous nationalism.

The author also rejects the popular notion that Nazi pressure lurked behind the Vichy government's colonial actions, and that the regime lacked any real agency in colonial affairs. He shows that, far from allowing the Germans to run French colonies from behind the scenes, Vichy leaders vigorously promoted their own undiluted form of ultra-conservative ideology throughout the French empire. They delivered to the colonies an authoritarianism that not only elicited fierce opposition but sowed the seeds of nationalist resurgence among indigenous cultures. Ironically, the regime awoke long-dormant nationalist sentiments by introducing to the empire Pétain's cherished themes of authenticity, tradition, folklore, and völkism.