Essays form an integral part of your history courses. They can also be one of the most rewarding aspects of a course, giving you a chance to research the raw material of history (primary sources) and to analyze other historians’ interpretations of the past (secondary sources). Essay writing is an opportunity to develop your research and writing skills. It is ultimately a lesson in communication. No matter how comprehensive your research or how brilliant your ideas, the essay will flounder if it is not well-organized and presented in clear and grammatically correct English. Obviously, good essay writing requires time. Pay attention to deadlines and give yourself sufficient time to research, write and revise your essay. The following guidelines are geared to the writing of History essays.

In many classes, you will be given a list of essay topics from which to choose. It is wise to do some preliminary research to determine what topics really interest you and it is also advisable to clarify your chosen topic with your TA or instructor. If you are allowed to select your own topic or wish to substantially modify a given topic, be sure you have your topic approved by your TA or instructor.

Finding and researching appropriate and adequate sources for your essay will be a critical part of its success. No essay should be attempted on the basis of text books or one or two sources. In the John Robarts Library, you have access to one of the major research libraries in North America and there are other more specialized libraries on campus. Be sure to familiarize yourself with the U of T library system. All holdings can be searched on-line; the on-line catalogue is an essential research tool. It can also be helpful to do an actual shelf search; several hours spent browsing through library shelves on areas indicated in your first sources often lead to valuable discoveries. In addition to books, don’t neglect articles on your subject. Articles in periodicals are too often overlooked by students, although they may contain new approaches to and concise sources of information. Discuss research problems with librarians and do employ all available aids for use of the library system. Don’t be afraid to ask for help. Websites: These days students are often turning to rapidly-proliferating websites for sources. Sometimes these can be helpful, especially if they are archival websites which can give you direct access to primary documents. However, websites should be used with caution. In some fields, websites can be the source of much inaccurate information and controversial and/or ill-founded opinion. If you want to use a website in your essay writing, you should adhere to the following procedure.

1. Get the approval of your instructor in advance for websites that you are planning to use.

2. Websites must be listed accurately in your bibliography and if you use material from them, it must be properly footnoted.

You should make and revise outlines while researching the paper, emphasizing your developing perception of the major issues. Research cards are your main tools. They should be filed under topic headings, reviewed, and rearranged frequently in order to fill in gaps in information or analysis. This enables you to determine what is of value as you research the paper; to return to an orderly collection of material if you have to leave it for any reason; and to organize your thoughts when you finally sit down to write the paper.

Again, it must be emphasized that you should leave sufficient time for at least one draft. Work from an outline, coordinating your research notes, but leaving yourself enough flexibility to make changes. The first draft can be written quickly, as it is for substance and arguments, which can be refined with each succeeding draft. In later drafts you can concentrate on polishing your style. You should make sure:

1. the introduction is clear, indicating the historical context and the problem under discussion
2. the narrative and argument are presented logically and concisely in the body of the essay
3. the conclusion summarizes and unifies the arguments presented

Essays should be carefully proofread and checked for correct spelling and grammar. Academic are usually written in formal style. Thus you should generally avoid contractions and colloquialisms unless the subject matter particularly calls for such usage. On the other hand “formal” does not mean verbose, stodgy or vague. Long Latinate words, passive constructions, and sentences that begin “it is” or “there are” are common patterns which result in obscure or boring writing. Good academic writing is formal, but also lively and direct. As a general rule, it is better to aspire to clarity and economy; few students find difficulty meeting the suggested length of the essay. Verbosity is demonstrated more often than brevity. Good writing is also precise. Try to choose words that express your intention exactly. Modern academic style requires care and precision in the use of language regarding race and gender. Just as you would avoid racist slurs and words that convey old-fashioned racial stereotypes, it is important to avoid phrases and words that are gender exclusive, unless you consciously intend them to be so. Do not use phrases such as “the history of mankind” when you really mean humanity. Using the pronoun “he” when you are referring to subjects of both genders should be avoided. Beware of false universals; for example, do not say “the inhabitants” when you mean the adult male residents, or “universal suffrage” when you really mean “white adult male suffrage”.

The final draft should be typed on standard size 11″ x 8 1/2″ paper. Use double spacing, except for long quotations (over twenty-five words) and footnotes which should be single spaced. Remember to number all pages. The essay should have a title page which includes your name, student number and course number (and tutorial section if appropriate). Be sure you keep a copy of your paper.

It is obvious that most ideas presented in an undergraduate essay will derive from other sources, so it is necessary that these be acknowledged. In general, footnotes should be used to make clear to the reader on what authorities you are basing your statements. The History Department prefers what is called the traditional system of footnotes and endnotes, as illustrated below. In particular, footnotes should:

1. indicate the exact source of every quotation used
2. acknowledge indebtedness to others for opinions and ideas
3. give authority for a fact which the reader might question
4. call attention to other interpretations, additional authorities or more extended treatment of the topic. Such a “substantive” footnote should be used with restraint.

Footnotes can appear either at the bottom of the page or collected together at the end of the essay where they are referred to as endnotes. The numeral indicating the footnotes should come at the end of the quotation or the sentence, usually as a superscript. Think of a footnote as conveying four pieces of information which are set off by commas in the following order:

In subsequent references, a shorter reference can be used. It should include the author’s last name, a meaningful short title, and page numbers. For example:

Where the reference is exactly the same as the preceding one, the Latin abbreviation ibid. can be used; where it is the same, but the page number is different, use ibid., followed by the relevant page number. However, the short title form is preferable for subsequent references and the use of other Latin abbreviations such as op.cit. is not recommended.

All works consulted, not just those cited in the footnotes, should be indicated in the bibliography. You may be required to prepare an annotated bibliography, wherein you comment on the contents, utility, or worth of each source. If so, make sure you understand what the instructor expects, in particular the length as well as the nature of each annotation. Generally, list the sources in alphabetical order, by author. In some assignments, you may be required to subdivide the bibliography into primary and secondary sources. The format for a bibliography is similar to that for footnotes, except that the author’s surname precedes the other names and initials, periods instead of commas are used to divide the constituent parts, publication data is not put in brackets, and pages numbers are not included except in the case of articles where the full page reference is necessary. For example:

Careless, J.M.S. The Union of the Canadas. The Growth of Canadian Institutions

There are numerous other sources to assist you in essay writing. A good place to start is with the U. of T. Writing website which offers excellent advice on academic writing. Published guides include:

Essays are expected to be handed in on the due date. Instructors are required to inform students on the course outline what their penalties for lateness are. If you have good reason to request an extension, it is advisable to do this before rather than after the fact.

Research does not mean hunting for books, or just reading them. It means reading your sources with definite questions in mind. Essays should not be written from open books, but from notes made while reading sources. Orderly arrangement of these is imperative, including the author, title, and page number of the source. Whether you are taking notes by hand or by computer, be sure your are systematic and accurate. There are a number of methods for organizing your notes. One traditional way is to use two different types of cards, “bibliography” (author-title) cards and “research” (subject-information) cards. Bibliography cards give relevant information about the sources used. They include the name of the author, the full title, and the location and date of the edition used. This card includes your evaluation of the usefulness of the source for your topic and relevant details about the author and his/her method. You will need this summation if you are asked to do an annotated bibliography.

The research card contains your notes on the topic, with a separate card for each important idea or piece of information. If you are copying material that you might wish to quote, be sure that it is copied accurately, that you have the exact source including page numbers, and that you have separated “quotes” from summaries in your own words. Note-taking by computer should be an adaptation of these basic procedures. You should keep all your research notes. In some junior-level courses, you may be required to submit them with your essay. 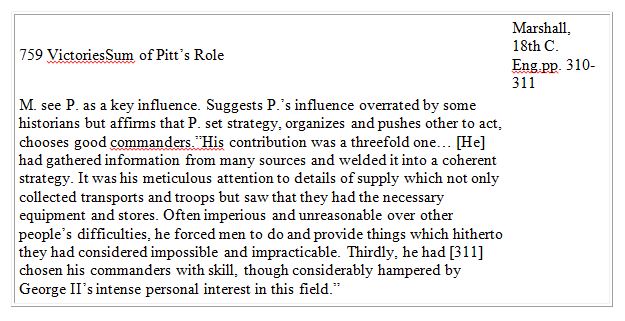