Localism, Landscape, and the Ambiguities of Place: German-Speaking Central Europe, 1860-1930 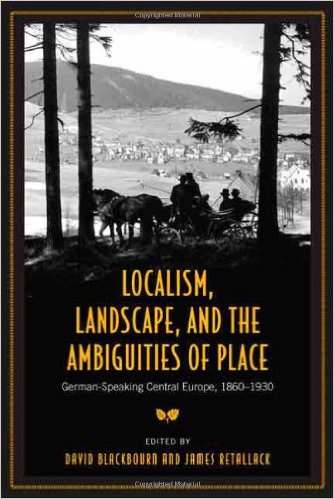 What makes a person call a particular place 'home'? Does it follow simply from being born there? Is it the result of a language shared with neighbours or attachment to a familiar landscape? Perhaps it is a piece of music, or a painting, or even a travelogue that captures the essence of home. And what about the sense of belonging that inspires nationalist or local autonomy movements? Each of these can be a marker of identity, but all are ambiguous.

Where you were born has a different meaning if, like so many modern Germans, you have moved on and now live elsewhere. Representing the 'national interest' in parliament becomes more difficult when voters demand attention to local and regional issues or when ethnic tensions erupt. In all these situations the landscape of 'home' takes on a more elusive meaning.

Localism, Landscape, and the Ambiguities of Place is about the German nation state and the German-speaking lands beyond it, from the 1860s to the 1930s. The authors explore a wide range of subjects: music and art, elections and political festivities, local landscape and nature conservation, tourism and language struggles in the family and the school. Yet they share an interest in the ambiguities of German identity in an age of extraordinarily rapid socio-economic change. These essays do not assume the primacy of national allegiance. Instead, by using the 'sense of place' as a prism to look at German identity in new ways, they examine a sense of 'Germanness' that was neither self-evident nor unchanging.