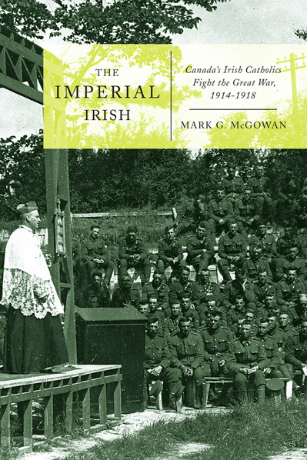 Between 1914 and 1918, many Irish Catholics in Canada found themselves in a vulnerable position. Not only was the Great War slaughtering millions, but tension and violence was mounting in Ireland over the question of independence from Britain and Home Rule. For Canada’s Irish Catholics, thwarting Prussian militarism was a way to prove that small nations, like Ireland, could be free from larger occupying countries. Yet, even as tens of thousands of Irish Catholic men and women rallied to the call to arms and supported government efforts to win the war, many Canadians still doubted their loyalty to the Empire.

Retracing the struggles of Irish Catholics as they fought Canada’s enemies in Europe while defending themselves against charges of disloyalty at home, The Imperial Irish explores the development and fraying of interfaith and intercultural relationships between Irish Catholics, French Canadian Catholics, and non-Catholics throughout the course of the Great War. Mark McGowan contrasts Irish Canadian Catholics' beliefs with the neutrality of Pope Benedict XV, the supposed pro-Austrian sympathies of many immigrants from central Europe, Irish republicans inciting rebellion in Ireland, and the perceived indifference to the war by French Canadian Catholics, and argues that, for the most part, Irish Catholics in Canada demonstrated strong support for the imperial war effort by recruiting in large numbers. He further investigates their religious lives within the Canadian Expeditionary Force, the spiritual resources available to them, and church and lay leaders’ negotiation of the sensitive political developments in Ireland that coincided with the war effort.

Grounded in research from dozens of archives as well as census data and personnel records, The Imperial Irish explores stirring conflicts that threatened to irreparably divide Canada along religious and linguistic lines.