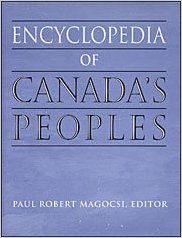 All peoples living in Canada deserve to have a voice in its history. How and why did each people come to Canada? Where did the immigrants and their descendants settle? What kind of lives did they build for themselves and how did they contribute to the country as a whole? These are the kinds of questions addressed in the Encyclopedia of Canada's Peoples.

Whether a First Nation, founding people, or subsequent arrival, all Canada's peoples are described in 119 individual entries that range from Acadians to Ukrainians, Hyderabadis to Vietnamese. In each instance an entry covers the origin of the group, the process of migration, arrival and settlement, economic and community life, family and kinship patterns, language and culture, education, religion, politics, intergroup relations, and the dynamics of group maintenance. Entries are cross-referenced and include tables, graphs, and suggestions for further reading. Several thematic essays are also included to illuminate the complex issues related to immigration, assimilation, multiculturalism, and Canadian culture and identity.

This is a truly national encyclopedia that has taken almost a decade to produce and has involved over 300 scholars and researchers from all parts of Canada and abroad. Exacting standards for research, content, and the readability of entries have been strictly maintained by an advisory board of senior academics from a wide range of disciplines.

The Encyclopedia of Canada's Peoples is designed to excite all Canadians about their extraordinary past and the potential of their future. This volume will reward both casual browsing and serious reading by everyone from school-age students to university academics.