Empire's Garden: Assam and the Making of India 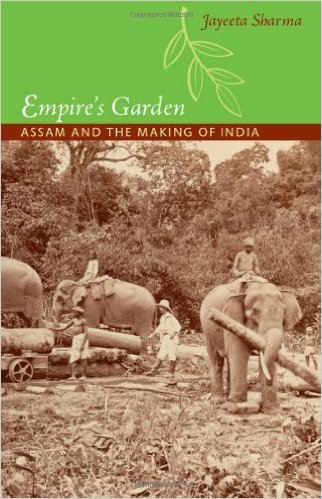 In the mid-nineteenth century the British created a landscape of tea plantations in the northeastern Indian region of Assam. The tea industry filled imperial coffers and gave the colonial state a chance to transform a jungle-laden frontier into a cultivated system of plantations. Claiming that local peasants were indolent, the British soon began importing indentured labor from central India. In the twentieth century these migrants were joined by others who came voluntarily to seek their livelihoods. In Empire’s Garden, Jayeeta Sharma explains how the settlement of more than one million migrants in Assam irrevocably changed the region’s social landscape. She argues that the racialized construction of the tea laborer catalyzed a process by which Assam’s gentry sought to insert their homeland into an imagined Indo-Aryan community and a modern Indian political space. Various linguistic and racial claims allowed these elites to defend their own modernity while pushing the burden of primitiveness onto “non-Aryan” indigenous tribals and migrant laborers. As vernacular print arenas emerged in Assam, so did competing claims to history, nationalism, and progress that continue to reverberate in the present.