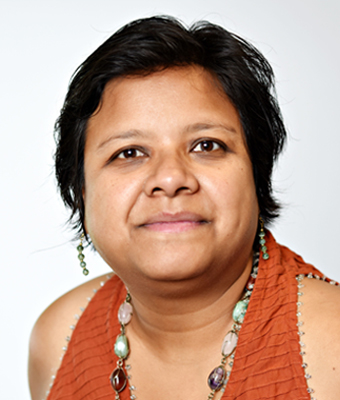 Jayeeta Sharma is an Associate Professor in History at the University of Toronto. She holds affiliated status with the Global Asia Studies Program, the Asian Institute, the Department of Religion, and the Diaspora and Transnational Program at the University of Toronto. She is an active member of the Editorial Collective of the journal Radical History Review and the editorial board of Global Food History. She is also the series editor for the Empires in Perspective book series from Pickering Chatto Press.

Born in Assam, Jayeeta has studied and taught history on three continents. After receiving a BA, MA, and M.Phil from the University of Delhi, she won a Commonwealth Scholarship to complete her PhD at Cambridge University. Subsequently, she was an Assistant Professor at Carnegie Mellon University and the University of Western Ontario before moving to Toronto.

Another of her interests is the history of food, particularly in reference to South Asian and Indo-Caribbean imperial and trans-migrant circulation. She has recently embarked on collaborative and digital humanities projects via the Eastern Himalaya Research Network where she is the founding member.