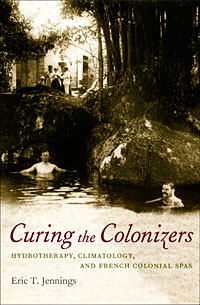 “Beware! Against the poison that is Africa, there is but one antidote: Vichy.” So ran a 1924 advertisement for one of France’s main spas. Throughout the French empire, spas featuring water cures, often combined with “climatic” cures, thrived during the nineteenth century and the twentieth. Water cures and high-altitude resorts were widely believed to serve vital therapeutic and even prophylactic functions against tropical disease and the tropics themselves. The Ministry of the Colonies published bulletins accrediting a host of spas thought to be effective against tropical ailments ranging from malaria to yellow fever; specialized guidebooks dispensed advice on the best spas for “colonial ills.” Administrators were granted regular furloughs to “take the waters” back home in France. In the colonies, spas assuaged homesickness by creating oases of France abroad. Colonizers frequented spas to maintain their strength, preserve their French identity, and cultivate their difference from the colonized.

Combining the histories of empire, leisure, tourism, culture, and medicine, Eric T. Jennings sheds new light on the workings of empire by examining the rationale and practice of French colonial hydrotherapy between 1830 and 1962. He traces colonial acclimatization theory and the development of a “science” of hydrotherapy appropriate to colonial spaces, and he chronicles and compares the histories of spas in several French colonies—Guadeloupe, Madagascar, Tunisia, and Réunion—and in France itself. Throughout Curing the Colonizers, Jennings illuminates the relationship between indigenous and French colonial therapeutic knowledge as well as the ultimate failure of the spas to make colonialism physically or morally safe for the French.