Carriers of Culture: Labor on the Road in Nineteenth-Century East Africa 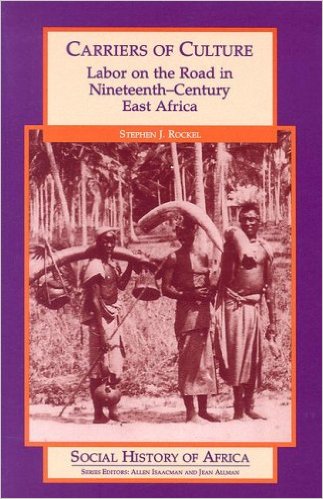 Much writing about 19th-century East Africa has been distorted by the legacy of post-Enlightenment thought as well as by more insidious racist ideologies. Humanitarian lobbies throughout Western Europe, strongly influenced by positivist ideas, and campaigning to highlight the ravages of the slave trade, condemned Africa in their writings and propaganda to the periphery, outside universal history. Africa was reduced to a continent of slavery, in which the market, entrepreneurship and free wage labour could not exist. These ideas penetrated scholarly works and still survive in some guises. The consequence is that a variety of initiatives and forms of labour organization associated with the long distance trades in ivory and imported cloth have been overlooked by scholars, while the slave paradigm received widespread attention. Utilizing the conceptual tool of crew culture, Rockel documents a large-scale African migrant labour system. Nyamwezi caravan porters from the interior, as well as coastal Zanzibaris and Waungwana, forged a unique way of life in which market values and experience of wage labour and the caravan safari combined with customary standards and notions of honour derived from innovative reconceptualizations of tradition. The safari experience, commercial change, and interactions with peasant and pastoral communities along the trade routes, all contributed to the emergence of a unique East Africa modernity. This book can be read on a variety of levels It is a journey, a labour history, a story of African initiative and adaptation to modernity, and a contribution to a history of Tanzania and East Africa that gives due attention to intersocietal linkages, and networks.

Rockel utilizes a variety of methodologies and theoretical approaches derived from neo-Marxist and postcolonial perspectives, as well as Africanist innovations in oral historiography and labour and gender studies. Drawing on such insights, Carriers of Culture develops and expands our understanding of the way workers invent new and unique cultures to make sense of and control the labour process, create support networks including collective leisure activities, maximize and protect economic interests, and manage the labour market. The book is clearly written, and is illustrated with late-19th-century photographs and artwork.