Professor & Canada Research Chair in Religion, Pluralism and the Rule of Law 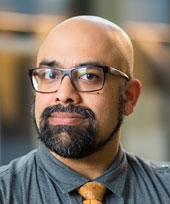 Anver M. Emon is a leading scholar of Islamic law who works across multiple legal traditions in both his research and teaching, and brings that scholarly grounding to his consultations for governments, NGOs and legal advocacy groups around the world.  As of Fall 2018, Professor Emon will be splitting his appointment between the Department of History and the Faculty of Law.

Dr. Emon's research focuses on premodern and modern Islamic legal history and theory; premodern modes of governance and adjudication; and the role of Shari'a both inside and outside the Muslim world.  His general academic interests include topics in law and religion; legal history; and legal philosophy. At the Faculty of Law, he has taught torts, constitutional law, legal ethics, and statutory interpretation, while offering specialized seminars on Islamic legal history, gender and Islamic law, and law and religion.  In the Department of History, Dr. Emon will develop courses in both the undergraduate and graduate curricula in the fields of Islamic history, Islamic legal studies, and law and history.  The recipient of numerous research grants, he was named as a 2014 Guggenheim Fellow in the field of law and awarded the 2017 Kitty Newman Memorial Award in Philosophy from the Royal Society of Canada.

In addition to publishing numerous articles, Emon is the author of Islamic Natural Law Theories (Oxford University Press, 2010), in which he illustrates a distinctively jurisprudential disciplinary approach among premodern Muslim jurists toward the authority of reason in the law.  In his Religious Pluralism and Islamic Law: Dhimmis and Others in the Empire of Law (Oxford University Press, 2012), Emon contested whether concept of 'tolerance' offered a helpful framing device for understanding the premodern Islamic rules governing the treatment of non-Muslim permanent residents in Muslim lands (e.g. the ahkam al-dhimma).  In his co-edited anthology Islamic Law and International Human Rights Law: Searching for Common Ground? (Oxford University Press, 2012) Emon collaborated with the International Bar Association and the Salzburg Global Seminar to interrogate the universal, general, and descriptive language used by advocates of both human rights and Islamic law to claim each tradition as a fount of justice.  The collection brought together leading historians and jurists from around the world to 'clear ground' between the two often contesting traditions of value and justice. Professor Emon's current projects involve book length monographs that address the historical epistemology of premodern Islamic law, and more broadly, the historiography of Islamic studies as a field across the humanities and social sciences.  In both projects, he is fundamentally interested in the epistemic limits that make knowledge of Islam and Islamic law possible across time, space, and scalar orientations.

Emon was the founding editor of Middle East Law and Governance: An Interdisciplinary Journal, and currently serves as the series editor of the Oxford Islamic Legal Studies Series. Moreover, as of July 1, 2018, Dr. Emon was appointed as the Director of the Institute of Islamic Studies at the University of Toronto.