The Near and Middle Eastern Civilizations Student Union's new virtual lecture series titled Highlighting Hidden Stories: Examining the Relationship Between the African Continent and the Middle East looks to challenge the artificial boundary between these two regions, and explore the lives, experiences and roles played by marginalized voices in Middle East history. This lecture series consists of a series of lectures/panel discussions taking place over the course of the year, each on a new theme and engaging with a different region of Africa.

In this lecture Dr. Deubel will explore the Hassani musical genre today, its political significance, and its influences from the oral poetic tradition in Hassaniya Arabic, classical Arabic poetry, and neighboring sub-Saharan cultures.

Dr. Tara Deubel is Assistant Professor and Graduate Director in the Department of Anthropology at the University of South Florida in Tampa. She is a sociocultural anthropologist with regional expertise in Africa and the Middle East. Her research interests include language and performance, gender and development, forced migration and refugee resettlement, and visual anthropology. She has conducted long-term fieldwork in Morocco, Mali, Mauritania, and Algeria. She is the co-editor of Saharan Crossroads: Exploring Historical, Cultural and Artistic Linkages between North and West Africa and several book chapters and articles, including “Poetics of Diaspora: Sahrawi Poets and Postcolonial Transformations of a Trans-Saharan Genre in Northwest Africa” in the Journal of North African Studies. Her current project examines the racialized and gendered experiences of sub-Saharan African migrants in southern Morocco. She is also planning a three-year summer field school in Agadir, Morocco funded by the National Science Foundation to study the socioeconomic and environmental impacts of edible and cosmetic argan oil produced by rural Amazigh women. 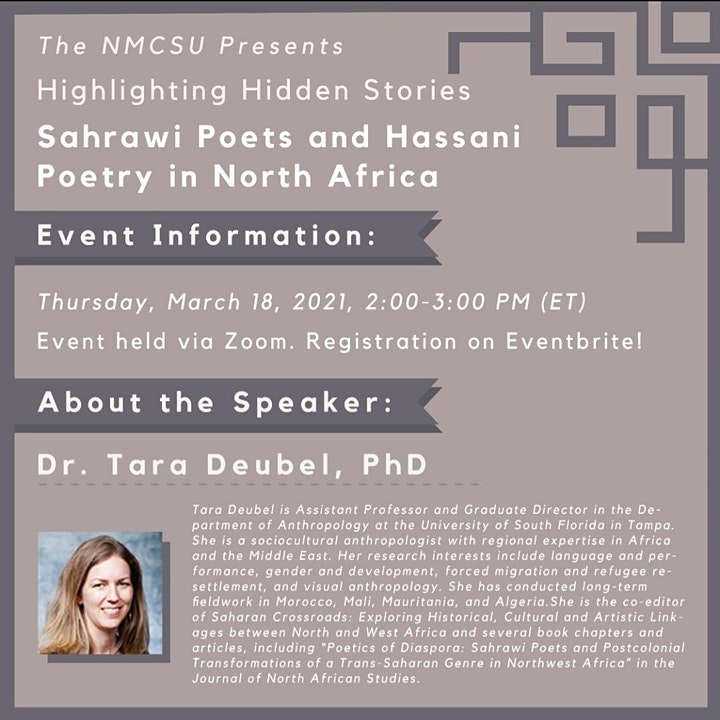