Leading Up to Osaka 2019: Japan's Role in Global Governance 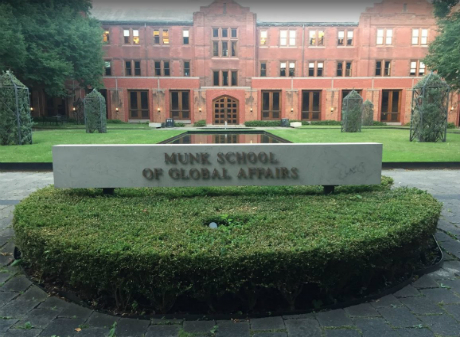 With less than four months until the 2019 G20 summit is hosted in Osaka, Japan, this panel event will bring together experts to discuss Japan’s role in global governance and plurilateral summitry, specifically in the context of the G7 and G20. Organized by the G20 Research Group, the G7 Research Group, the International Relations Society (IRSOC), the Contemporary Asian Studies Student Union (CASSU), and co-sponsored by the Centre for the Study of Global Japan, this discussion will focus on the history of Japan’s involvement in global governance, its contribution to the management of global affairs and the challenges it faces as the current G20 host and on the international stage writ large. This event will host J. Stefan Dupré Distinguished Professor of Political Economy and Interim Director of the Centre for the Study of Global Japan, Professor Louis Pauly, G7 and G20 expert Dr. Peter Hajnal, and Japan International Cooperation Agency civil servant Mrs. Kazuko Funakoshi.

Kazuko Funakoshi has extensive career experience in development finance, and is currently studying at the Munk School of Global Affairs and Public Policy. Prior to the Munk School, she was leading the Official Development Assistance (ODA) loan projects team in Nepal at the Japan International Cooperation Agency (JICA)—the government agency in charge of Japan’s ODA. At JICA, Kazuko formulated and implemented large-scale infrastructure projects across Asia in various sectors such as energy, environment, transport and housing—some of which were co-financed with the World Bank and the Asian Development Bank. She also has experience with emergency response operations (Specifically, the 2015 Nepal Earthquake). She holds a master’s degree in Agricultural Economics from Kyoto University in Japan.

Peter Hajnal is a Fellow of Senior College and Research Associate, Munk School of Global Affairs & Public Policy, University of Toronto. He has been a member of the G7/G8/G20 Research Groups since 1988 and attended fourteen G7/G8/G20 summits. Before his retirement he was Adjunct Professor, Faculty of Information, University of Toronto for 11 years; served as librarian for 25 years at the University of Toronto and 10 years at the United Nations Dag Hammarskjöld Library in New York; and conducted a number of consultancies. In addition to a number of articles, book chapters and conference presentations, he is the author or editor of eleven books, including The G8 System and the G20: Evolution, Role and Documentation (Ashgate, 2007; also published in Russian and Chinese editions). His latest book is the second, revised edition of The G20: Evolution, Interrelationships, Documentation (Routledge, 2019).

Louis W. Pauly is the J. Stefan Dupré Distinguished Professor of Political Economy in the Department of Political Science at the University of Toronto. He is cross-appointed to the Munk School of Global Affairs and Public Policy, where he also serves as Interim Director of the Centre for the Study of Global Japan. A graduate of Cornell University, the London School of Economics, New York University, and Fordham University, he was named a Fellow of the Royal Society of Canada in 2011. With Emanuel Adler, he edited the journal International Organization from 2007 to 2012. In 2015, he received the Distinguished Scholar Award in International Political Economy from the International Studies Association. His major publications include Power in a Complex Global System; Hong Kong’s International Financial Centre; Global Ordering: Institutions and Autonomy in a Changing World; Global Liberalism and Political Order; Complex Sovereignty; Governing the World’s Money; Democracy beyond the State?; The Myth of the Global Corporation; Who Elected the Bankers? Surveillance and Control in the World Economy; and Opening Financial Markets: Banking Politics on the Pacific Rim.