Weapons of Mass Persuasion: Marketing the War Against Iraq 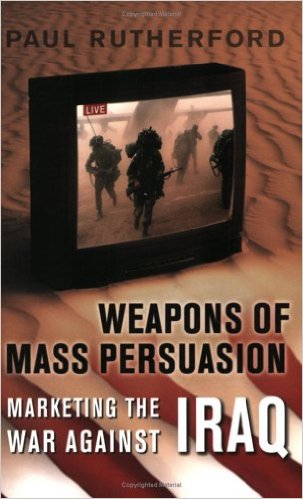 With nearly sixty percent of Americans initially against a pre-emptive war without sanction from the United Nations, and even higher anti-war numbers in most other nations of the world, the 2003 war against Iraq quickly became an enormous public relations challenge for the George W. Bush administration. The subject of Weapons of Mass Persuasion is a war in which American patriotism became so mired in commercial jingoism that the demarcations between entertainment and political conduct disappeared completely.

In this engaging and disturbing book, Paul Rutherford shows how the marketing campaign for the war against Iraq was constructed and carried out. He argues that not only was the campaign a new chapter in the presentation of real-time war as pop culture, but that its deeper implications have now come to constitute part of the history of modern democracy. Situating the war against Iraq within an existing tradition of war as narrative, spectacle, and, more broadly, commodity, Rutherford offers a brief overview of the history of civic advertising and propaganda, then examines in detail the different dimensions of three weeks of war presented to North Americans as it became a branded conflict, processed and cleansed to appeal to the well-established tastes of veteran consumers of popular culture.

Including incisive analyses of visual material - speeches, editorial cartoons, and media political commentary, but particularly news reports of such sound bite events as the bombing of Baghdad, the toppling of the Hussein statue, and the rescue of captured soldier Private Jessica Lynch - as well as extensive polling data from around the world and interviews with the actual consumers of war, Weapons of Mass Persuasion chronicles the making of a Hollywood war: fast-paced and heroic, pitting the forces of good against the forces of evil to achieve a triumphant, sanitized, and commodified outcome. Not since Naomi Klein's No Logo have the gods of marketing and the art of commercialism been so thoroughly disrobed.