The Renaissance in the Nineteenth Century Le XIXe siècle renaissant 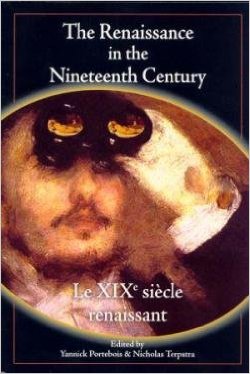 The nineteenth century witnessed rapid economic and social developments, profound political and intellectual upheaval, and startling innovations in art and literature. The pace of change was unmatched since the Renaissance. As Europeans peered into an uncertain future, they drew on the Renaissance for meaning, precedents, and identity. Many claimed to find inspiration or models in the Renaissance, but as we move across the continent’s borders and through the century’s decades, we find that the Renaissance was many different things to many different people.

This collection brings together an international collection of sixteen authors who examine the many Renaissances conceived by European novelists and poets, artists and composers, architects and city planners, political theorists and politicians, businessmen, and advertisers. The essays fall into three groups:

Aesthetic Recoveries of Strategic Pasts looks primarily at the work of creative artists and writers in France, where the Renaissance was largely a sixteenth-century affair. Many believed that it was France’s “true ” tradition, that it demonstrated an immediacy and vigour that had been suffocated by the classicism of the seventeenth and eighteenth centuries.

The Renaissance in Nineteenth-Century Culture Wars turns the focus to political and religious issues in France and Italy, with a focus on the meaning of freedom, a concept commonly associated with the period but for very different reasons.

Material Culture and Manufactured Memories looks at how new industrial techniques, new fortunes, and new political demands turned the Renaissance into a valuable and evocative brand in the marketplaces of the bourgeois century.