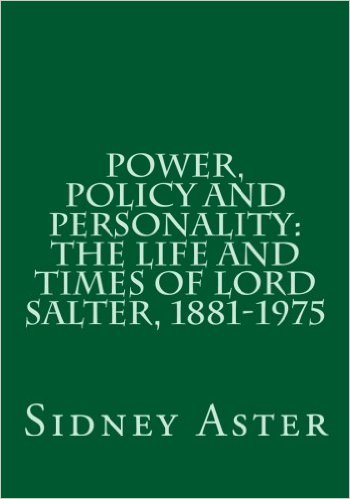 There is hardly a historical biography or monograph dealing with the first half of the twentieth century which does not refer to Sir Arthur (later Lord) Salter. Yet, this book represents his first biography. The historical record reveals Salter had intimate, global access to the seats of power. He rose doggedly, through increasingly influential positions, national and global, political and economic. As a prominent civil servant he was instrumental in shaping the welfare state. He was a pioneering administrator with the League of Nations and the United Nations. He was an original member of the European Movement, a world recognised authority on economics and finance, an Oxford professor, an Independent and then a Conservative MP, and a cabinet minister in two of Sir Winston Churchill’s governments. He was, as well, an influential author, journalist, advocate and broadcaster.

Lord Salter’s historical impact begins with his work as a civil servant during the innovative period of the British National Health Insurance Act of 1911, and his leadership in the wartime Ministry of Shipping. He played a central role in establishing the convoy system, which enabled Britain to overcome the German u-boat campaign and thus avoid starvation. His creative role continued in the 1920s, as an international civil servant while at the Allied Maritime Transport Council, the Reparation Commission and as the first Director of the Economic and Financial Section of the League of Nations. Throughout, he pioneered modern approaches to inter-allied cooperation, European integration, and an international civil service. In the 1930s Salter’s popularity, resulting from his best-selling book, Recovery (1932), outmatched that of Keynes. As an Independent MP for Oxford University, he opposed appeasement and lobbied for the storage of raw materials for a war he knew was inevitable. His pivotal wartime role was to head the British Merchant Shipping Mission to Washington from 1941-1943. There, he convinced the Americans to build boats to supply and feed a beleaguered Britain; saving his country from starvation. He assisted in the economic reconstruction of Europe, with his roles in the United Nations Relief and Rehabilitation Administration, and as Chancellor of the Duchy of Lancaster, Minister of State for Economic Affairs, and Minister of Materials.

With the completion of this biography, we have a multi-layered portrait of the Edwardian Salter, the wartime Salter, the 1920s Salter, the Depression Salter, and so on, down to the 1960s elder statesperson. The biography is based almost entirely on primary sources, including records of my interviews with Salter in the 1970s. It also makes use of documentation about Salter’s private life, entrusted to me by a number of his female friends. These include the unpublished diaries of Mary Agnes "Molly" Hamilton, MP, correspondence with Renée Lucy de Fossarieu, who served as Salter’s secretary in Paris and Geneva, and Catherine Arnold-Forster, "Ka" Cox, former intimate of Rupert Brooke. What emerges is a refreshing portrait of a highly cultured personality,with acute sensitivities and a real genius for friendship - an individual whose reputation is due for reinstatement in the mainstream of influential 20th century British statesmen.