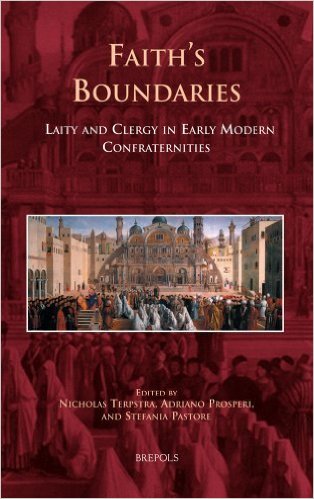 This volume explores how the relationship between confraternities and the clergy negotiated the boundaries of religious space in the late medieval and early modern periods.

Who owns the spaces of religion? Does the question matter, or even make sense? Modern distinctions between sacred and secular spheres tend to assume that clergy dominate the former, and lay people the latter. A man or woman living in the early modern period might not have been so sure. They would have thought more immediately of things of heaven and things of earth, and would have seen each as the concern of clergy and laity alike. Faith’s boundaries, while real, were very porous. This collection offers the first sustained comparative examination of lay–clerical relations in confraternities through the late medieval and early modern periods. It shows how laity and clergy debated, accommodated, resolved, or deflected the key issues of gender, race, politics, class, and power. The sixteen essays are organized into six sections that consider different aspects of the function of confraternities as social spaces where laity and clergy met, mediated, and sometimes competed and fought. They cover a period historically when kinship was a dominant metaphor in religious life and when kinship groups like confraternities were dominant models in religious institutions. They deal with Catholic, Jewish, and Islamic confraternities, and range geographically from Europe to the Middle East, Central and South Asia, and Latin America.