For the Common Good and Their Own Well-Being: Social Estates in Imperial Russia 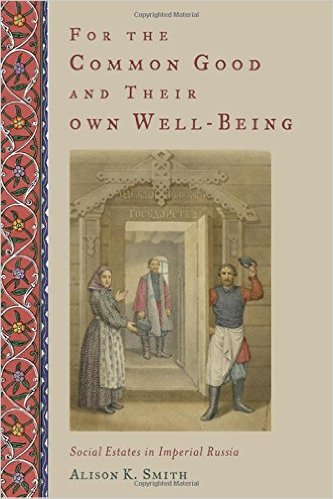 Every subject of the Russian Empire had an official, legal place in society marked by his or her social estate, or soslovie. These sosloviia (noble, peasant, merchant, and many others) were usually inherited, and defined the rights, opportunities, and duties of those who possessed them. They were also usually associated with membership in a specific geographically defined society in a particular town or village. Moreover, although laws increasingly insisted that every subject of the empire possess a soslovie "for the common good and their own well-being," they also allowed individuals to change their soslovie by following a particular bureaucratic procedure. The process of changing soslovie brought together three sets of actors: the individuals who wished to change their opportunities or duties, or who at times had change forced upon them; local societies, which wished to control who belonged to them; and the central, imperial state, which wished above all to ensure that every one of its subjects had a place, and therefore a status. This book looks at the many ways that soslovie could affect individual lives and have meaning, then traces the legislation and administration of soslovie from the early eighteenth through to the early twentieth century. This period saw a shift from soslovie as above all a means of extracting duties or taxes, to an understanding of soslovie as instead a means of providing services and ensuring security. The book ends with an examination of the way that a change in soslovie could affect not just an individual's biography, but the future of his or her entire family. The result is a new image of soslovie as both a general and a very specific identity, and as one that had persistent meaning, for the Imperial statue, for local authorities, or for individual subjects, even through 1917.