The Art of Executing Well: Rituals of Execution in Renaissance Italy 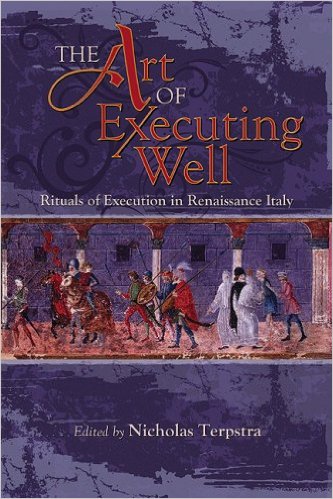 In Renaissance Italy a good execution was both public and peaceful—at least in the eyes of authorities. In a feature unique to Italy, the people who prepared a condemned man or woman spiritually and psychologically for execution were not priests or friars, but laymen. This volume includes some of the songs, stories, poems, and images that they used, together with first-person accounts and ballads describing particular executions. Leading scholars expand on these accounts with articles explaining particular aspects of the theater, psychology, and politics of execution.

The main text is a manual, translated in English for the first time, on how to comfort a man in his last hours before beheading or hanging. It became an influential text used across Renaissance Italy. A second lengthy piece gives an eyewitness account of the final hours of two patrician Florentines executed for conspiracy against the Medici in 1512. Shorter pieces include poems written by prisoners on the eve of their execution, songs sung by the condemned and their comforters, and popular broadsheets reporting on particular executions. It is richly illustrated with the small panel paintings that were thrust into prisoners’ faces to distract them as they made the public journey to the gallows.

Six interdisciplinary essays explain the contexts and meanings of these writings and of execution rituals generally. They explore the relation of execution rituals to late medieval street theater, the use of art to comfort the condemned, the literature that issued from prisons by the hand of condemned  prisoners, the theological issues around public executions in the Renaissance, the psychological dimensions of the comforting process, and some of the social, political, and historical dimensions of executions and comforting in Renaissance Italy.