American Cinema of the 1910s 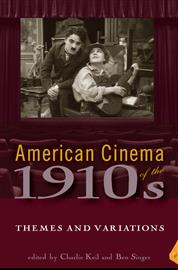 It was during the teens that filmmaking truly came into its own. Notably, the migration of studios to the West Coast established a connection between moviemaking and the exoticism of Hollywood.

The essays in American Cinema of the 1910s explore the rapid developments of the decade that began with D. W. Griffith's unrivalled one-reelers. By mid-decade, multi-reel feature films were profoundly reshaping the industry and deluxe theatres were built to attract the broadest possible audience. Stars like Mary Pickford, Charlie Chaplin, and Douglas Fairbanks became vitally important and companies began writing high-profile contracts to secure them. With the outbreak of World War I, the political, economic, and industrial groundwork was laid for American cinema's global dominance. By the end of the decade, filmmaking had become a true industry, complete with vertical integration, efficient specialization and standardization of practices, and self-regulatory agencies.