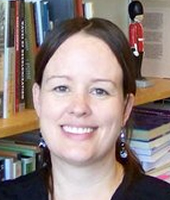 Paula Hastings received her PhD in History from Duke University.  She is currently Assistant Professor of History in the Department of Historical and Cultural Studies at UTSC and in the Tri-Campus Graduate Program at the University of Toronto.

Her research and teaching center on the imperial and global contexts of Canada’s political, social and cultural histories during the 19th and 20th centuries.  She is interested, more specifically, in Canada’s evolving relationship with Britain and the Caribbean since Confederation and in the histories of imperialism/colonialism, race, migration, and nationalism. She is currently completing a book manuscript entitled Dreams of a Tropical Canada: Race, Empire, and Canadian aspirations in the Caribbean Basin, 1870-1966, and is conducting research on a second book-length project, tentatively titled Reorienting the Map around the Pacific: The Panama Canal and Shifting Spatial Imaginaries in Twentieth Century Canada.