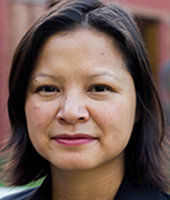 I trained in Chinese legal history at the University of Pennsylvania and Chinese gender and Southeast Asian social history at UCLA, my intellectual interests lie at the intersection of gender, law, and religion Southeast Asia, themes well-represented in my scholarly and pedagogical work. Viet Nam: Borderless Histories (co-edited with Anthony Reid, 2006) provided a first look at the new trends in historical scholarship on Viet Nam in the twenty-first century. Familial Properties: Gender State and Society in Early Modern Vietnam (2018), the first full-length study of Vietnamese women’s history in any language, examines how some women negotiated state law and local custom to secure their financial and spiritual futures. I have just completed a new book, Catholic Identity, Religious Sensibilities, and Vernacular Writing in Early Modern Vietnam (1615-1783), examines how Vietnamese believers articulated, circulated, and practiced Christianity through their own words, preserved in letters and testimonies. I am working on two other long-term research projects: (1) an intellectual history of the idea of property from Vietnamese and Cham sources, and (2) study of the history of the book through Buddhist and Christian texts. In my research, I seek to understand how individuals living in the plural religious settings of early modern Vietnam understood and articulated the meaning of institutions and objects that have been presumed to be “universal.”

I teach broadly in the areas of gender, food, religious, and regional histories in the Indian Ocean World.  These include introductory lecture courses such as HIS110Y: “Connected Histories from Dakar to Jakarta,” which I team-teach with Professor Sean Hawkins; HIS205H: “Introduction to Gender History,” and HIS283Y: “History of Southeast Asia.”  I teach upper level thematic and regional courses such as HIS315H:“History of Vietnam; HIS331H1: “Vietnam at War,” HIS333H1: “Catholic Asia,” and HIS342H: “Rice, Sugar, & Spice in Southeast Asia.” Finally, I also teach small seminars at the at the first and fourth-year levels, including HIS198H: “Decolonizing Women’s History,” HIS406H: “Gender in East and Southeast Asia,” HIS400H: “The French and American Wars in Viet Nam,” and HIS496H: “Religion and Society in Southeast Asia.”  At times, and with generous funding from the Faculty of Arts and Sciences through the International Course Module Program, I have been able to take students enrolled in my courses to Southeast Asia.

In addition to my scholarly and pedagogical work, I am committed to doing public history and forging links between scholars and the local stakeholders impacted by our research. To these ends, I have collaborated with the Vietnam Museum of Ethnology and Buddhist and Catholic communities in Viet Nam. I have led an international team of researchers evaluating women's access to land rights across ten provinces in Vietnam for the United Nations Development Fund (UNDP). I am a former director of the Centre of Southeast Asian Studies at UofT and have served on the Editorial Board of the Oxford Research Encyclopedia of Asian history, the Southeast Asia Council of the Association for Asian Studies (as Chair 2013-14), and the Board Directors of the Association for Asian Studies.