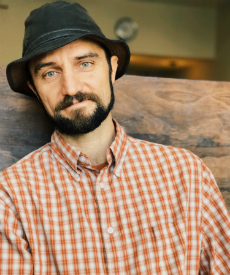 Kevin Coleman's research examines the intersection between capitalism and photography, primarily in Latin America. He is the author of A Camera in the Garden of Eden (2016), a number of book chapters and journal articles, as well as the Principal Investigator of Visualizing the Americas, a digital humanities project. His research has been funded by the Andrew W. Mellon Foundation / American Council of Learned Societies, the Social Sciences and Humanities Research Council of Canada (SSHRC), and a United States Department of Education's Fulbright-Hayes Fellowship.

With support from a SSHRC Connections Grant, he led three major collaborative inquiries into the relations between capitalism and photography: Capitalism and the Camera (2021), Photography and Culture (2020), and Radical History Review (2018). He is currently working on a documentary film, The Photos We Don’t Get to See, that attempts to make visible how physical violence gets repeated at the level of the archive.

Similar themes animate his teaching. Coleman offers courses in modern Latin American history, the history of capitalism, and advanced undergraduate seminars organized around a variety of themes, from religion to revolution and counterrevolution. His graduate offerings include the Images as History seminar on theory and methods for historians working with visual archives, and a seminar in Latin American history that provides students with a foundation for understanding the region’s key historiographic debates.

“The Photos We Don’t Get to See: Sovereignties, Archives, and the 1928 Massacre of Banana Workers in Colombia,” in Making the Empire Work: Labor and United States Imperialism, edited by Daniel E. Bender and Jana K. Lipman (New York: New York University Press, 2015), pp. 104-136.